Signing of agreement between Switzerland and the UK on citizens’ rights

Switzerland and the United Kingdom are safeguarding the existing rights of their citizens for the time when the UK is no longer a member of the EU. As part of the Federal Council’s Mind the gap strategy, State Secretary Mario Gattiker and his British counterpart, Parliamentary Under-Secretary Christopher Heaton-Harris, signed an agreement in Bern. 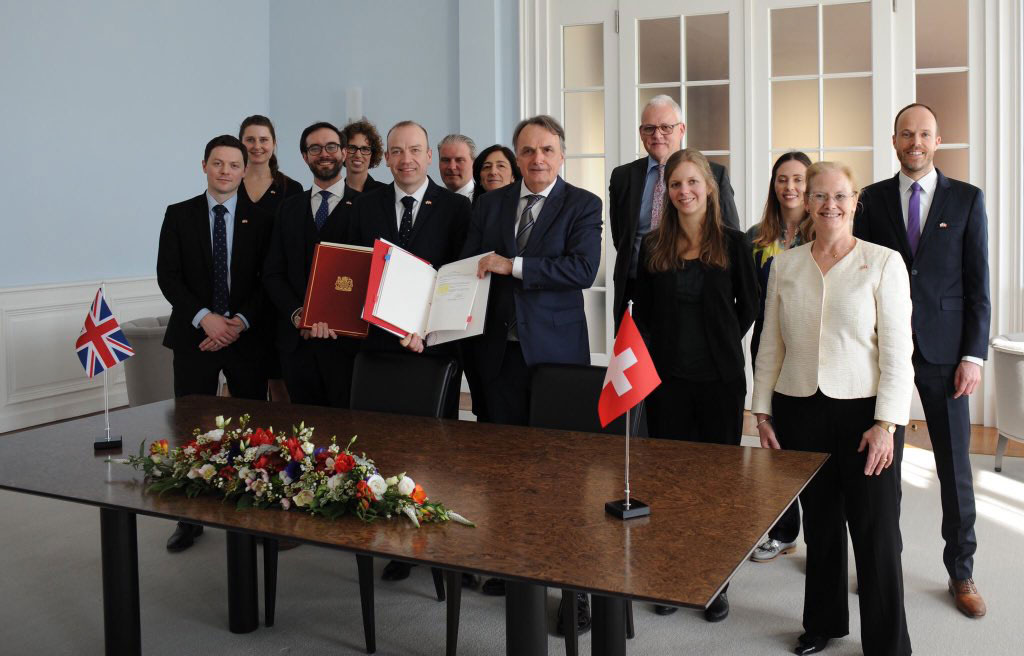 Under the agreement signed today, both Swiss and British citizens will retain the rights obtained under the Agreement on the Free Movement of Persons (AFMP) between Switzerland and the EU after Brexit. This concerns people from the one country living in the other under the AFMP. The rights granted are valid for life. Thanks to this agreement, services being provided between Switzerland and the UK can also be completed. In addition to settling residency rights, the agreement also regulates social security claims and the recognition of professional qualifications. The Federal Council approved the agreement on 19 December 2018.

The Agreement will enter into force when the AFMP between Switzerland and the UK is no longer applicable. This is at the end of the transition period agreed between the EU and the UK (expected to be 1 January 2021). In order for the transition period to begin, the EU and the UK must first ratify the Withdrawal Agreement. Should that agreement not be ratified, the agreement signed today will apply from the day after the UK leaves the EU, provisionally from 30 March.

As part of its "Mind the Gap" strategy, the Federal Council wishes to ensure that the existing mutual rights and obligations in its relationship with the UK will continue to apply as far as possible after the UK leaves the EU, and to expand them in certain areas. With this in mind, Switzerland and the UK have already signed agreements on road transport, air transport and insurance.

Switzerland and the UK are seeking to reach a temporary fall-back arrangement in the event of the UK’s disorderly withdrawal to mitigate the undesired consequences of an abrupt discontinuation of freedom of movement for people wishing to take up work in the respective countries. Independently of this, the Federal Council decided on 13 February to create a separate quota as a temporary measure, allowing 3500 British citizens to work in Switzerland.

Christopher Heaton-Harris and Mario Gattiker sign agreement to safeguarding the existing rights of their citizens for the time when the UK is no longer a member of the EU: https://t.co/nz6XaDL09y @DExEUgov #Brexit pic.twitter.com/QuUwOiA2Ab