20 years after Beijing Conference: President Sommaruga calls in New York for pace of progress on gender equality to be stepped up

Bern. Equality between men and women, active involvement of citizens in a sustainable development agenda and efforts to put in place effective, accountable institutions: President Simonetta Sommaruga spoke at events on these and other themes on the fringes of the Sustainable Development Summit in New York at the weekend. At a high-level meeting on gender equality – 20 years after the World Conference on Women in Beijing – President Sommaruga stressed that it was time to step up the pace of progress.

Event of the international organisation IDEA 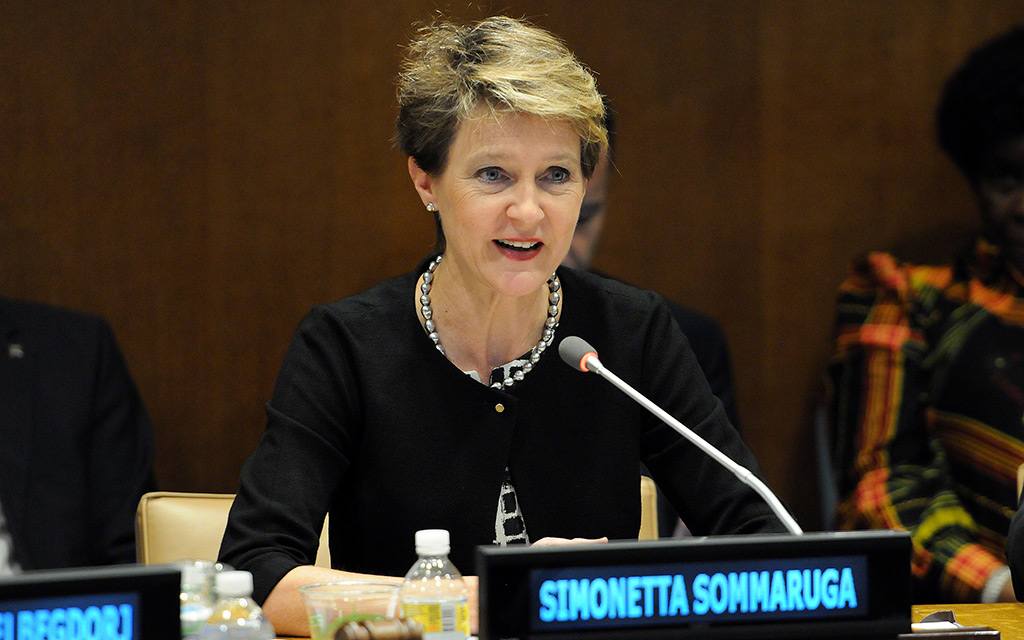 Together with the President of Mongolia and the Vice President of Botswana, President Sommaruga co-chaired an event organised by the Institute for Democracy and Electoral Assistance (IDEA) (Foto: IISD Reporting Services)

Despite the many advances that have been made, the prevailing level of discrimination and violence against women and girls means that the overall result of the last twenty years cannot be seen as positive, explained President Sommaruga. By 2030, the world community must genuinely achieve equality between women and men, girls and boys. "Without gender equality it will not be possible to put an end to global poverty, or bring about lasting economic progress", stressed the president. The fact, for example, that women caught up in wars are still systematically subject to abuse and rape is totally intolerable.

Switzerland therefore welcomes the inclusion of equality and the empowerment of women in the 2030 Agenda for Sustainable Development. "At the domestic level, we must still work to eradicate wage discrimination, improve work-life balance and family life, and prevent domestic violence. At the international level, Switzerland will continue to work towards and provide funding for gender equality and the rights of women", explained President Sommaruga. Switzerland will increase its funding for the UN Women entity to USD 49.5 million in the period 2015-2017.

Together with the President of Mongolia, Tsakhia Elbegdorj, and the Vice President of Botswana, Mokgweetsi E.K. Masisi, President Sommaruga co-chaired an event on Saturday organised by the Institute for Democracy and Electoral Assistance (IDEA) on the subject of "Engaging People for Sustainable Development: Accountability, Transparency and Participation". Switzerland holds the chair of IDEA this year, which will pass to Mongolia in 2016.

The Sustainable Development Summit closes on Sunday. On Monday, the 70th UN General Assembly opens with the "high-level" week. President Sommaruga will set out the cornerstones of Switzerland’s foreign policy regarding the UN in a speech during the general debate at the opening of the General Assembly.