Bern. President Simonetta Sommaruga travelled to Ljubljana on Tuesday for a two-day official visit aimed at strengthening cooperation between Switzerland Slovenia. She was received by her Slovenian counterpart, President Borut Pahor. The topics discussed during official talks on the first day included bilateral relations, the European policies of both countries and the European refugee crisis. 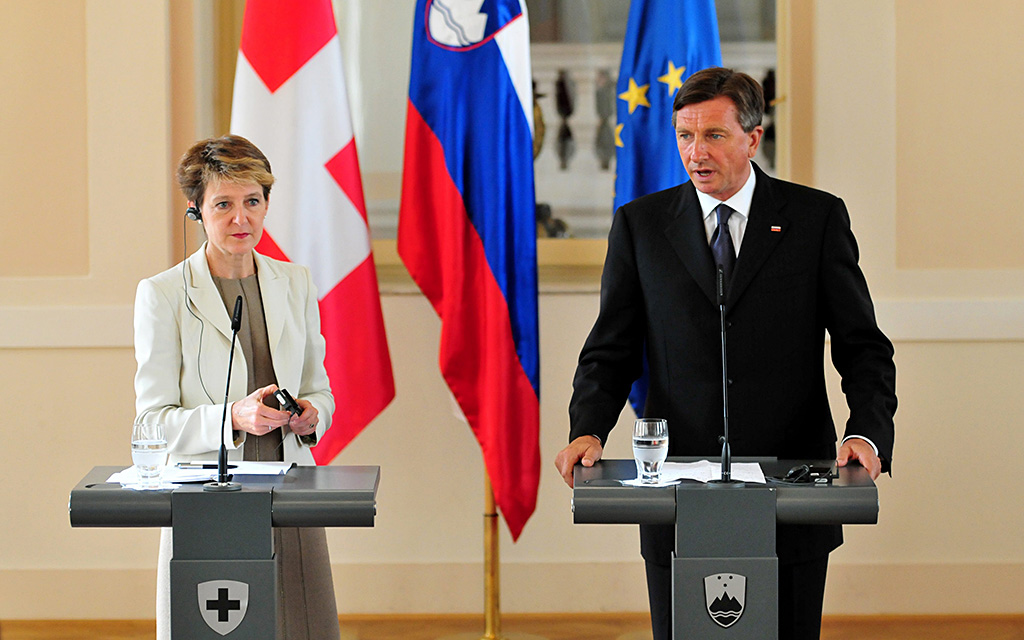 The two sides sounded out possibilities for closer cooperation in multinational bodies, in the Western Balkans and the Alpine region. Discussions also covered economic exchanges and matters of education and research. “Switzerland and Slovenia are very similar in many respects. We should try to make the most of this potential in future”, stated the president.

With regard to international issues, the focus was on asylum and migration policy and the tense situation on the route through the Western Balkans. The two presidents stressed that national solutions alone would not be sufficient to resolve the current refugee crisis. They expressed their hope and expectation that the EU member states would find solutions for a common, united asylum policy over the coming weeks and months and introduce appropriate measures.

In addition, Ms Sommaruga informed her counterpart about the state of the ongoing consultations with the EU in connection with the implementation of the initiative against mass immigration.
They also discussed developments in family law. Political debates are currently taking place in both countries about how to reconcile legislation with contemporary ways of living.

The visit by President Sommaruga is the first official meeting between the two countries at presidential level in five years. During her visit Ms Sommaruga will also meet the prime minister, Miro Cerar, and a number of other government ministers, as well as the president of the National Assembly, Milan Brglez.

Relations between the two countries have intensified in recent years, in part due to Switzerland’s CHF 22 million enlargement contribution, which is being used to realise eight projects in Slovenia. During the visit, special recognition will be paid to the results of this successful cooperation.

A ceremony to mark the completion of a project on renewable energy sources in the Alpine region will take place at Bled Castle on Wednesday, and in Maribor President Sommaruga will be given a tour of the new radiotherapy facility at the University Medical Centre; the Slovenian staff were trained at the cantonal hospital in Bellinzona.

The president is being accompanied at both sites by other members of the Slovenian government; in Bled by Alenka Smerkolj, minister for development, strategic projects and cohesion, and in Maribor by health minister Milojka Kolar Celarc.

The last stop on President Sommaruga’s trip is dedicated to Swiss-Slovenian economic relations and the concerns of social partners. Over 40 Swiss firms operate in Slovenia, employing over 10,000 people. Switzerland is the second largest investor in the country after Austria.

Together with Prime Minister Cerar, President Sommaruga will inaugurate a site in Lendava in the east of the country built by Sandoz-Lek, a generic drug producer which is part of the Novartis group, and speak with employees and union members.