Bern, 17.08.2015. On Monday, 17 August 2015, Federal Councillor and Head of the Federal Department of Foreign Affairs Didier Burkhalter opened the Ambassadors and International Network Conference in Bern, with German Foreign Minister Frank-Walter Steinmeier in attendance as guest speaker. The theme of this year’s four-day conference is “Switzerland and the world – excellence in the service of solidarity”. After the opening of the conference on Monday, Mr Burkhalter and his German counterpart met for bilateral talks. Mr Steinmeier then paid the President of the Swiss Confederation, Simonetta Sommaruga, a courtesy visit. 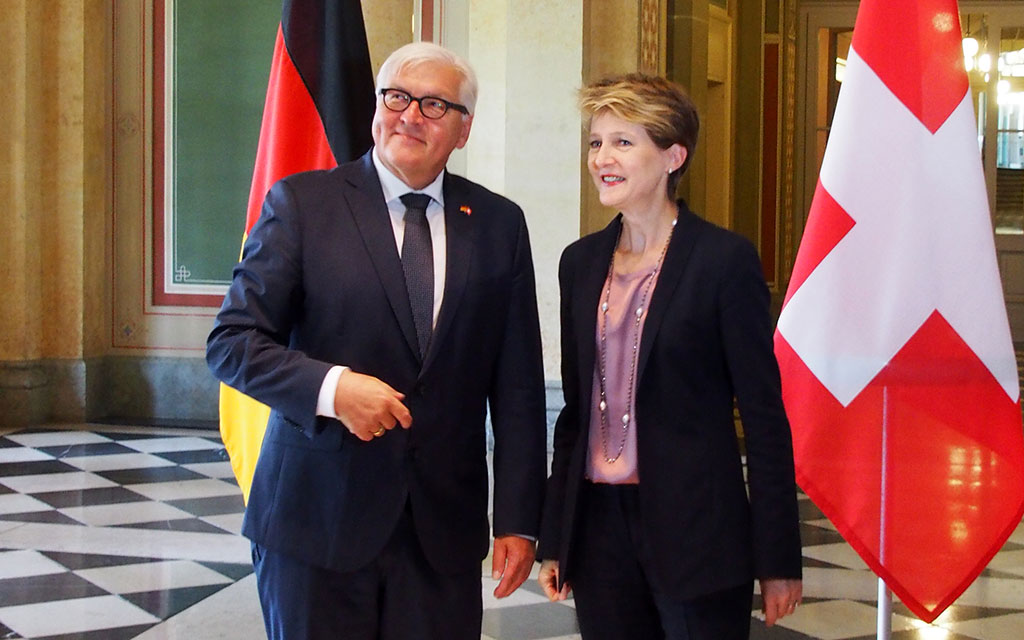 Following the Ambassadors Conference opening event, Mr Burkhalter and Mr Steinmeier met for bilateral talks at the Von Wattenwyl House in Bern. Their discussions focused on the pending dossiers concerning relations between Switzerland and the European Union (EU). Switzerland’s neighbouring countries are to be more closely involved in ongoing consultations to solve the question of free movement of persons. The two ministers also addressed the debt crisis and the related situation in Greece. A lasting solution to the crisis and a return to sustainable growth in Europe are of key importance to the Swiss economy too. Transport and energy provided a further topic of conversation, the latter with regard to a proposed electricity agreement between Switzerland and the EU. Based on its role as an electricity hub, Switzerland contributes significantly to stability and security of supply in Europe. The continuation of this role in the future is to be ensured by means of an agreement.

The dialogue also covered European security and the role of the Organization for Security and Co-operation in Europe (OSCE). Security and peace in Europe and throughout the world are among the priorities of Switzerland’s foreign policy. The OSCE Chairmanship passes to Germany in 2016 and to Austria in 2017. Switzerland had the chair in 2014.

Following the meeting with Mr Burkhalter, Mr Steinmeier paid President Sommaruga a courtesy visit, with relations between Switzerland and the EU again the focus of talks. President Sommaruga informed Mr Steinmeier about current progress in implementing the article of the Federal Constitution on managing immigration, and about ongoing consultations regarding the Agreement on the Free Movement of Persons with the EU. Ms Sommaruga and Mr Steinmeier also discussed current challenges with regard to migration policy. Both countries advocate a coordinated pan-European asylum policy based on solidarity.

Ambassadors and International Network Conference 2015: “Switzerland and the world – excellence in the service of solidarity”

Around 260 representatives of Switzerland (ambassadors in Switzerland and abroad, consuls-general, heads of cooperation offices of the Swiss Agency for Development and Cooperation as well as senior management of the FDFA) are meeting in Bern from 17 to 20 August for the annual Ambassadors and International Network Conference.
The opening addresses by Mr Burkhalter and Mr Steinmeier revolved around the theme of “Foreign policy priorities and expertise in a changing world”. Mr Burkhalter made reference to Switzerland’s future commitment in the area of peace and security as well as the competencies that the FDFA needs to build on more intensively for this purpose.
The first two days of the conference will be devoted to panel discussions and workshops tackling a wide range of foreign policy and security issues – such as questions on European security in view of the Ukraine crisis, the 2030 Sustainable Development Agenda and the current state of and prospects for relations between Switzerland and the EU. On Tuesday, President Sommaruga will make a plenary address. On Wednesday, the conference participants will travel to the Federal Institute of Technology in Lausanne (EPFL), where they will discuss the global challenges facing science and technology, and the future role that science could conceivably play in the world of diplomacy. The ambassadors will then visit the École hôtelière de Lausanne (Lausanne Hospitality Management School). On the fourth and final day of the conference, Switzerland’s assembled representatives will, at the invitation of President Sommaruga, visit the Humanus House Foundation in Rubigen – a “residential home with employment” that provides active living space to people with special needs.
“Diplomacy and economic development” was the theme of last year’s conference that took place in Lugano. The tradition of the Ambassadors and International Network Conference dates back to 1887, when the then President of the Confederation, Numa Droz, invited the heads of the five missions that existed at the time – Paris, Vienna, Rome, Berlin and Washington – to attend a conference. Except for a hiatus during the two world wars, it is a tradition that has remained uninterrupted. Respective heads of mission held the title of minister until the mid-1950s, so the event was referred to as the Conference of Ministers until 1960.

This year, the Conference of Swiss Honorary Consuls takes place at the same time as the Ambassadors Conference, with some 150 honorary consuls also meeting in Bern from 17 to 19 August. Swiss honorary representatives are professionals with many years of experience in their host country, who are familiar with the local environment and equipped with the requisite language skills. Honorary representatives carry out their mandate on a voluntary basis. This year’s conference is the second of its kind, the first having taken place in 2011. In particular, it serves as a platform for passing on specialist knowledge and sharing insights and experience.