Bern. The President of the Swiss Confederation, Simonetta Sommaruga, travelled to Spain on Monday for a two-day visit. She was received by King Felipe VI and met for talks with both Prime Minister Mariano Rajoy and Deputy Prime Minister Soraya Sáenz de Santamaría. The main subject of the discussions, besides bilateral relations between Switzerland and Spain, was European policy and immigration policy. 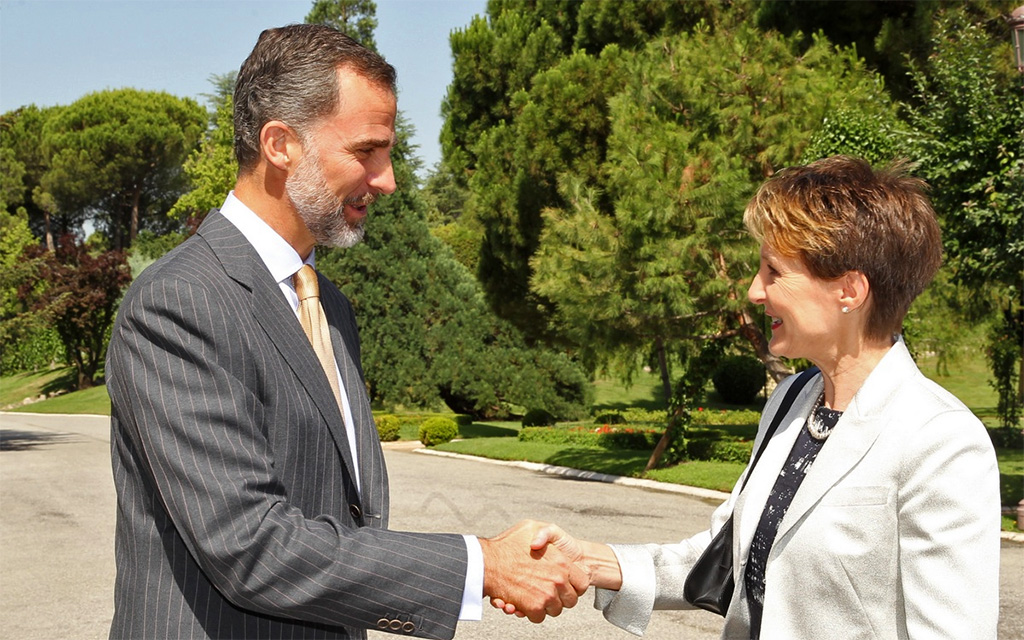 In her meeting with Prime Minister Rajoy, Ms Sommaruga explained the challenges that Switzerland currently faces in its European policy and the status of consultations with Brussels following the popular vote on 9 February 2014. The Federal Council aims to secure independent control over immigration to Switzerland while safeguarding general economic interests. At the same time, the bilateral path will continue to be the basis for relations with the EU. Prime Minister Rajoy explained that Spain supports this dialogue.

A further central topic of discussion was the situation in the Mediterranean and its implications for European immigration policy. Ms Sommaruga and Mr Rajoy stressed that the challenges posed by the high numbers of immigrants currently entering Europe cannot be solved at a national level. It is essential for the countries of Europe to develop a coordinated and concerted policy.

Besides the Spanish prime minister, when in Madrid Ms Sommaruga also met Soraya Sáenz de Santamaría, Spanish deputy prime minister and government spokesperson. They acknowledged the value of the cooperation between Switzerland and Spain under the Schengen/Dublin agreements and exchanged views on current political developments in each country. In addition, they updated each other on measures to combat terrorism and to deal with persons who have been fighting abroad and who have returned to Europe (foreign fighters).

Ms Sommaruga was received by the Spanish king, Felipe VI, in his royal residence, the Palacio de la Zarzuela in the El Pardo mountains near Madrid. The long tradition of Swiss-Spanish relations –Spain had an envoy to Switzerland as far back as the Middle Ages – and the current economic challenges facing Europe were among the subjects discussed. As of the end of 2013, around 75,000 Spanish nationals were living in Switzerland, while over 24,000 Swiss were living in Spain.

On the second day of her stay in Spain, Ms Sommaruga will visit the Spanish Coordination Centre for the Maritime Control of Coasts and Borders with the Spanish interior minister, Jorge Fernández Díaz. Ms Sommaruga will then travel on to Warsaw, where she will meet Polish president Bronisław Komorowski and the prime minister Ewa Kopacz on Wednesday. On Thursday, President Sommaruga will attend an informal meeting of the EU Justice and Home Affairs Council in Luxembourg.